HAPPY BOOK BIRTHDAY TO
IT'S COMPLICATED! 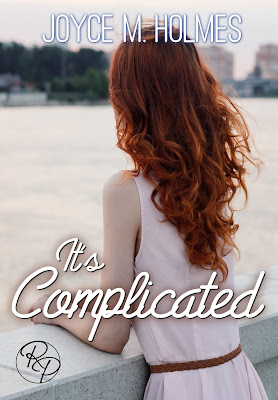 He wants a real relationship, she's afraid to love. It’s complicated, but is it impossible?

She’s a children’s counselor devoted to helping others; he’s a stubborn client reluctant to accept her assistance. He wants a warm and loving relationship; she prefers to keep things physical. Professional boundaries dictate neither of them can have what they want.

Having grown up with no one but herself to count on, Maggie Lapage carefully guards her feelings. Professionally, she goes above and beyond to give others the support she wishes she'd had as a child. When she develops a forbidden attraction to a client’s father, she does what she thinks is necessary, to save his family, and to protect her own heart.

Tom O’Shay finds his life caught in a nightmare when he risks losing custody of his daughter. It goes against his character to seek help, but he doesn’t have a choice. That doesn’t mean he has to like it. Everything changes when he falls hard for his daughter’s counselor, and he suddenly has two fights on his hands. One for his daughter, and another for the woman he loves.

It’s complicated, but is it impossible?

The Inspiration behind It's Complicated
by Joyce Holmes

Maggie Lapage, my female character in It’s Complicated, made her first appearance in Show No Weakness as a young co-worker of Joely Sinclair. Maggie had a knack for stirring up trouble. She called it helping people. Others might call it meddling. But she always had the best intentions. Several of my readers told me how much they loved her feisty personality, and their comments inspired me to write her story. I had a scenario in my head where she’d fit perfectly and, from there, the story quickly came together.

The storyline formed easily, but accurately portraying Maggie’s character was a little more of a challenge. She’s young, urban and loves all the girly-girl things I know little about. She’s tall and fashionable and very outgoing. Again, not anything I can easily connect with. I blogged about my dilemma at the time (https://joyceholmes.wordpress.com/2013/01/26/definitely-not-a-hip-young-urbanite/). Secondary characters are easy and fun to write; they can be quirky and even a little outrageous without necessarily needing to reveal what made them this way. Lead characters require more depth and motivation. I really wanted to do right by Maggie, because after everything she’d been through, she deserved it. Yes, she was impulsive and just a tad of a busybody, but once her background and motivations were made clear, her personality quirks became understandable and relatable.

I once knew a young man named Thomas. He was very much his own man and stubbornly independent, sometimes to his detriment. Thomas left this earth far too young, and to honour his memory, I named my male character, Tom O’Shay, after him. I also gave Tom some of that same quiet strength of character and stubborn independence. Who better to pit Maggie’s helpfulness against than someone who abhors needing help?

My inspiration for the storyline came from the place where all my stories come from. The desire to convey a real life situation full of emotion, which tugs on the heartstrings, and eventually finishes with a satisfying happy-ever-after. Hopefully, my readers will find that I accomplished this goal with Maggie and Tom’s tale, It’s Complicated.

Joyce Holmes lives with her husband and very small dog in the beautiful Okanagan region of British Columbia. Photography and blogging about her travels are two of her passions, along with visiting her kids and grandkids. When she's not dreaming up stories in her head or planning her next great adventure, she’s off enjoying the great outdoors.