Guest Post: Inspiration behind EYE ON THE BALL by Francine Beaton #Romance #Rugby 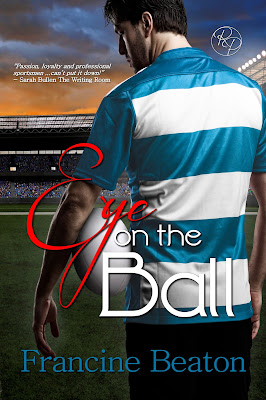 What would prove stronger? Love or Loyalty?

Top professional rugby player Jakes du Plessis desperately wants to keep his team's vow of celibacy in order to win the new International Rugby Club Competition, but he didn’t count on meeting ethereal artist Angie Summers.  Even a promise to his friends and teammates, demons from his past, and a distance of more than 9000 miles, could not stop Jakes from falling in love with Ange.  In the end, it took teamwork, perseverance and a whole lot of grovelling from Jakes’ side for them to overcome these obstacles, and find their Happily Ever After.

The inspiration behind Eye on the Ball
by Francine Beaton

Maybe years of following rugby and the increasing popularity of the game, had been the inspiration behind, or the reason for the series, Playing for Glory, of which Eye on the Ball is the first book to be published.
When you meet a fellow rugby enthusiast on a boat cruise on the Hudson during the Fourth of July celebrations, there had to be a reason why such a meeting made an impression. It was only on the long flight from New York to Johannesburg that the idea of the series started to form. Before then, I never considered writing about my beloved sport, not even romances. For the eight months since that New York trip, I plotted and wrote the first six books in the series and outlines of several other books. None of them was Eye on the Ball.
The first scene of Eye on the Ball came while watching a Six Nation’s Rugby Match on television. I got up, went to my study to type it up. When I was finished, I had the names of the two characters, Jakes and Ange, and I had the first scene of the book, but that was it.
When I plotted the series approximately eight months before, I created a team list. I planned the first six books, and built the team around the characters in those books, which I’ve written in that eight months. The only character that I had on my team list who might have been Jakes was the eighth man, JJ du Plessis, who didn’t have a story. He was just a number in the team. After I wrote that first scene, I thought it was going to be a Christmassy kind of story and called it, Under the Mistletoe.
After writing that first scene, Jakes kept on popping in my head and I spent more time thinking about him than I did the manuscript I’ve been working on. A few days after I’ve written that scene, the rugby world was shocked by the passing away of the Wallaby Dan Vickerman. There were many panel discussions and articles about his passing, but a discussion on a New Zealand talk show about Dan’s death and the struggles of professional sportsmen and women, really caught my attention. One panellist said that it was not uncommon that men in a macho environment don’t talk about their emotions and fears as they don’t want to appear weak. That phrase caught my attention and stuck.
I thought about it constantly. The only research before I continued writing was what could cause men in macho environments to fear that they were weak—or any man for that matter. I had my story in a matter of minutes.
The following morning I woke up at four, went to sit at the computer and started writing. It was amazing. It just flowed. The rest of the research I had to do along the way or afterwards. When I finished with the first draft barely a week after I’ve started, I had more than 130000 words.
After writing Eye on the Ball, I realized that this was not going to be the typical sports romance I envisioned when I planned the series. Jakes was the catalyst, I guess. Although Jakes had the looks, the physicality, macho male image, the intelligence and other attributes to make him an alpha male, Jakes wanted to highlight important issues that had nothing to do with his looks. I had no choice other than to comply.
Eye on the Ball is about a man who struggles to keep his focus on what he felt was important—his teammates, his team and their end goal. It is also about a woman who is strong enough to deal with Jakes’ fears and insecurities, although it may not sound like it. It sounds like Jakes’ story and it mostly is but Ange is one of those women who doesn’t need the limelight. It doesn’t make her weak. 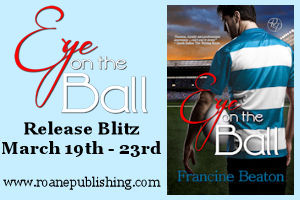 Born and brought up in Pretoria, South Africa, Francine had no choice but to fall in love with rugby at a young age. With three older, rugby-playing brothers and a father who was a fanatic supporter of the local team and the Springboks, Francine adopted the motto, If you can’t beat them, join them. After trying to play one game, Francine gave up the idea to play rugby. She opted to watch the boys from the side.

At the tender age of ten, she discovered the romance section in the local library and that was it. She was a fan. By fourteen, she had read all the ones in the Afrikaans section and switched to the English section. There was a time when Francine briefly abandoned her favourite genre to lose herself in crime novels, but as they say: you never forget your first love.

Rugby, romance and writing is not all that keep Francine busy. If she does not spent time with her Scottish husband and teenage daughter either at home or travelling, Francine loves to read, or dabbles in photography and painting.

She is a member of the Romance Writers Association of South Africa (ROSA).