#BookReview : Here (On the Otherside #1)

YA / Sci-Fi
by Denise Grover Swank 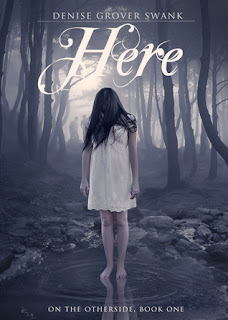 ﻿Sixteen year old Julia Phillips buries herself in guilt after killing her best friend Monica in a car accident. Julia awoke in the hospital with a broken leg, a new talent for drawing and false memories of the accident, in which she dies and Monica lives. The doctors attribute this to her head injury, but no one can explain how a bracelet engraved with her name ended up at the scene of the accident. A bracelet no one has ever seen before.

Classmate Evan Whittaker paid Julia no attention before the accident, let alone after. Now suddenly he’s volunteering to tutor her and offering to drive her home. She can't ignore that his new obsession started after his two-day disappearance last week and that he wears a pendant she’s been drawing for months. When the police show up one night looking for Evan, he begs Julia to run with him, convincing her that Monica is still alive. Julia agrees to go, never guessing where he’s really from.

﻿Rockin' cover, but that's besides the point. This one convinced me of what I didn't think possible - I'm a YA fan. Yup. Me.

I've read a handful, but this book got to me. The emotions of Ms. Swank's writing nabbed my attention & empathy from the get-go & didn't release me till near the end. That's where my less than 5 star review occured.

But, on to the usuals & you'll learn why.

Yummies:  Empathy. Emotions. Hooked. I had no idea a sci-fi element existed till it occurred. A good book suddenly became excellent, IMO.

Yuckies:  The climactic moment near the end of this book felt off. There is no violence (other than the bullying) till the ending, and suddenly Julia, the MC, *SPOILER ALERT* shoots a dude with a handgun - between the eyes.

Recommend:  Of course. And I can't wait for November's next installment!!!

Email ThisBlogThis!Share to TwitterShare to FacebookShare to Pinterest
Labels: Book Review, Denise Grover Swank, Here, On the Otherside, Sci-Fi, YA