Know How to Seduce a Fireman? Ms. Davis has a clue... #Romance #Excerpt 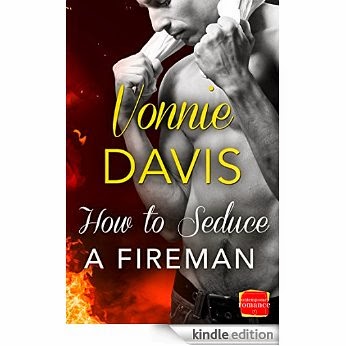 The heat is on…

Book 1 in the ‘Wild Heat’ series – the hottest new fireman trilogy of the fall!

Cassie Wolford has crushed on fireman Quinn Gallagher ever since he moved to Clearwater three years ago. There’s just one problem: he’s always made it clear dating is out of the question. But once a Wolford sets their sights on someone, that person doesn’t stand a chance! Cassie decides it’s time for Quinn to get a dose of his own medicine… and sets out to show him what he’s missing!

Quinn knows only too well what Cassie’s up to but he can’t give her what she wants. He isn’t good for anyone, much less someone as sweet as his angel. Fighting her off hurts like hell, but giving her false hope of a happy ever after would be damn cruel. That’s why he has to leave Clearwater.


Unfortunately, someone from his past has different ideas and when Cassie’s life is threatened this former CIA operative is staying put, prepared to crawl through hell and back to keep her safe. And it looks like he might just have to.

Einstein whined and licked her face.
A pink wrapped gift on the nightstand caught her eye. Was it for her? Or was it something Wolf had left for Becca? But why would he put it here and not in Becca’s bedroom? She reached for the oblong package and fingered the silver ribbon. A small gift tag read “To Cassie, from Quinn. Happy Birthday, Peanut.”
Her heart rate kicked into the happy-to-be-me category. He’d bought her a gift. Even if it was something cheap and goofy, he’d thought enough of her to buy it and have it wrapped. So why didn’t he bring it to her birthday party? Her eyes narrowed. Oh yeah, his mystery female visitor.
Pushing that thought aside, she slid the metallic ribbon off the box. No way could he have wrapped it so carefully. She slid her fingernail along the taped edge and folded back the iridescent pink paper. The embossed logo on the white jeweler’s box impressed her. Had Quinn really gone to Zales to buy her a gift? She snapped the lid open and gasped. From a delicate gold chain dangled a filigree heart pendant. An angel nestled within the open scrollwork edging the heart. Small brilliant diamonds covered the angel’s outstretched wings.
She blinked back tears. “Oh, Quinn, you do care. No matter what you say, you do care.” When he’d kissed her last night, he’d called her his angel. Is this how he thought of her? As an angel who’d wormed her way into his heart? She slid two fingers beneath the pendant, the warmth of the gold soaking into her skin like the sun’s rays on a bright June day. So beautiful. So fragile looking and yet solid, just like her feelings for him.
She pressed the white box to her heart and sighed. Her first jewelry gift from a man, and the man was Quinn.
Einstein sniffed what she held and then laid his chin on her shoulder, his black eyes studying her. She ran a finger between his eyes and down his muzzle. “I have an admirer. He’s just too scared to admit it yet. Poor schmuck.” She giggled with glee and the dog licked her face. “Poor chicken shit schmuck.” The canine’s tail beat a happy rhythm on the bed. 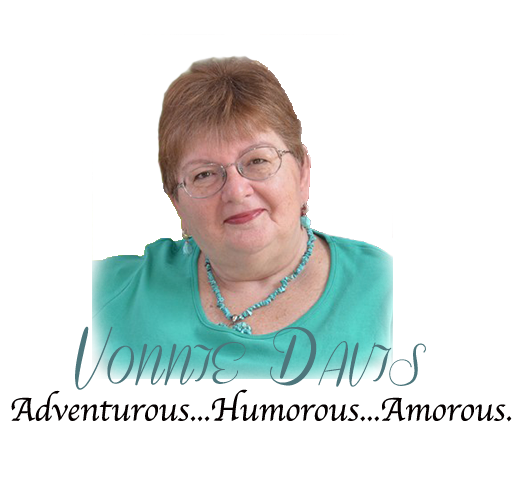 Vonnie Davis is an award-winning, international author who writes contemporary, historical and paranormal romance, often with strong elements of suspense.  She likens herself to a croissant: warm, crusty, wrinkled, a tad flaky—and best served with strong coffee.

Email ThisBlogThis!Share to TwitterShare to FacebookShare to Pinterest
Labels: Book Promo, How to seduce a fireman, Romance, Vonnie Davis