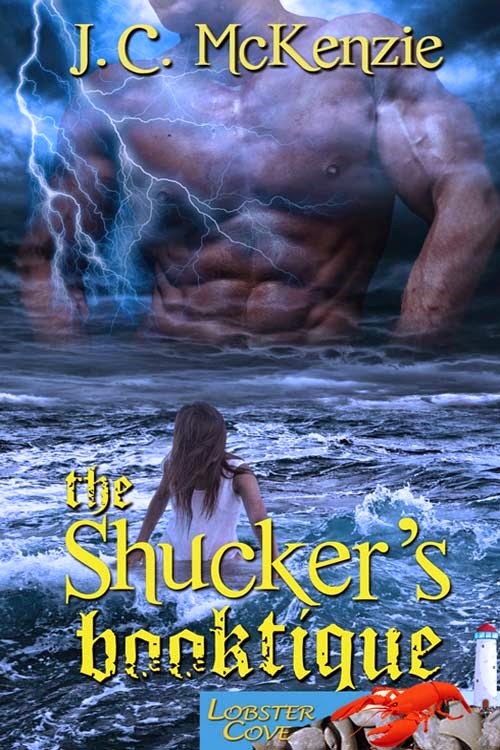 After her fiancé dumps her and her beloved Aunt Jenny goes missing, Willa Eklund travels to Lobster Cove with a broken heart to search for Jenny while running her bookstore. When a mysterious man visits the Shucker's Booktique on a stormy night drenched in rain and covered in mud, Willa's heart melts under his stormy gaze. She wants Lon and the answers he may have, but he also has a secret. Can Willa trust him?

Lon Devlin is a Tempest, a water sprite who can only take a human form during stormy nights. He rides the waves, lives by the tides, and nothing can hold him down, not even a beautiful woman. When he visits his mortal friend, he discovers she's missing and her intriguing niece has taken her place. He wants Willa, but he also wants answers. What happened to Jenny?

No! She gasped. It couldn’t be. The banging on the front door of the booktique had to be a figment of her imagination. She couldn’t will Lon into existence. Why would he come back? Especially if he was involved. Unless…cold ice prickled up her spine…unless he needed to eliminate her to take care of loose ends.

No. Crazy thoughts, Willa. He could’ve taken care of her the night before. No, her heart hammered against her chest for a different reason. But it didn’t matter. The knocking on the door wouldn’t, couldn’t be him.

Could it? She clutched her hot mug in both hands and turned toward the doorway leading to the bookstore. From the kitchen in the back room, she had a clear view through the store to the front door, but not who stood on the other side.

Willa gasped and almost dropped her cup. The tea sloshed around and some spilled over her hands. It burned, but she didn’t move. She couldn’t breathe. Somehow the air got trapped inside her throat. Why was he here? What did he want?

Born and raised on the Haida Gwaii, off the West Coast of Canada, J.C. McKenzie grew up in a pristine wilderness that inspired her to dream. She writes Urban Fantasy and Paranormal Romance.