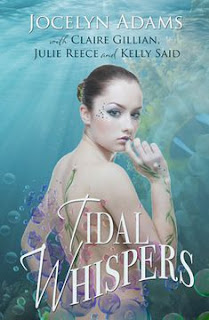 This short story is very moving - loneliness, loss, & love. Ms. Reece portrays them beautifully - brings them alive - so we can experience them with Tessa, the MC.

I don't know about you, but I've always had a dream world I escaped to. A few actually.  Tessa wakes from her favorite one to a gut wrenching reality that easily gained my empathy. I longed for her to re-find Cam, just knowing he would ease her heartache. And *spoiler alert!* he does.

I loved Disney's The Little Mermaid, and this story reminded me of it.  A voice lost, a love found, The Sweetest Song was just that - sweet.

Otis, the male interest in this story was precious. A great character, fleshed out & believable for so short a story. He heads to his doom for love which any fairy tale / fantasy needs IMO. The 'happily ever after' comes about by two gods, Poseidon and Aphrodite, who act like a couple of modern childish brats. That threw me a smidge. I always imagined the gods to be prim & proper - ancient, lofty, condescending beings.

Overall, a great little story I enjoyed submerging myself in.

While the whole anthology is fantasy in some way, Ms. Said is by far the most imaginative IMO. While all the stories are of love, this one has that magical element attached - a pearl - which brings the two characters together in dark, watery depths.

I had one major issue with this lovely story, though. Although fantasy, all stories still need that believability factor. One scene lacked that for me. Harmon, the male interest, rescues the lovely lady, Miki, from drowning. Moments later he leaves her treading water to dive down & retrieve her lobster trap. While down there he holds a long conversation w/ his brother, another merman, giving no thought to the weakened woman the pearl led him to. I just felt he'd be anxious to leave her side, or should have taken her to shore first seeing as how she doesn't have a tail, but two human legs. Dunno. Could just be me.

A wonderful little story, though, one NOT to be skipped.

﻿The Undergarden by Jocelyn Adams  5 Stars

This was by far my favorite story in the anthology. Ms. Adams drew me in and hooked my empathy from the get-go. She created two characters whose story affected me long after I finished reading. LOVE that.

Rarely do stories brim my eyes with unshed tears, but this one did. More than once. I felt Nixie's loneliness, enjoyed her innocence which was portrayed beautifully and consistently.  Her journey through life is touching - heart aching, yet warming. Surprisingly, it didn't feel rushed in the least bit.

This story, while fantasy like the rest, far outshone them with that magical feel - that dream-like quality that moved my emotions.

So do I recommend this anthology? Without a doubt. Add it to your Goodreads list HERE. Purchase your copy from Amazon or Barnes & Nobel.  You'll thank me later!!