September is for Sequels Hop: TWO of the #HollowayPack books by @JABelfield #PNR #Wolves

Thanks to I Am A Reader for hosting this hop! Definitely excited about this one.

What are they all about? 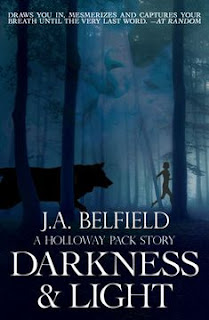 Darkness & Light (Holloway Pack #1)
PNR / UF
by J.A. Belfield
Jem Stonehouse, a housewife with a neurotic husband bent on keeping her in line, dreams about werewolves in, what she believes, is a bid to escape boredom.Sean Holloway is a werewolf, living a charade within the human race, whose mind drifts to a bond he shares with a woman he hasn't met — at least, not in this lifetime.Apart, the two are safe but live unfulfilled lives.Together, they'll become prey to rival packs just as they have been for hundreds of years.When their worlds collide, and not for the first time, instinct takes over. Dreams become reality. Futures are uncertain. To keep history from repeating itself, Sean must teach Jem about his heritage, convince her of her role, and win her love.Can Jem accept her destiny before it's too late, or is her inner wolf buried too deep to save her future with Sean?BONUS CONTENT!The ebook now includes all the following chapters, from Sean Holloway’s Point of View!:Fated Encounter – Chapter 10Of all the Burger Bars … – Chapter 12 & 13Welcome Back, Jem – Chapter 20Mates Reunited – Chapter 24 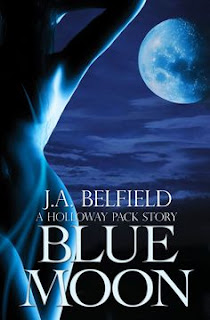 Blue Moon (Holloway Pack #2)
PNR / UF
by J.A. Belfield
Someone is watching the Holloway pack, and this time, the female isn’t the target. Life with a group of seven male werewolves worries Jem Stonehouse not one bit. She is engaged to the Alpha’s son Sean Holloway after all. So what has Jem’s territorial instincts on high alert?   The pack’s latest addition. Both of them.   None of the men think there’s a problem with the new girlfriends. Jem's intuition tells her otherwise—that and a nagging suspicion the new females aren't there to partake.   Jem believes they’ve joined in to take. The question is ... What?   As the eve of the blue moon draws ever closer, Jem’s running out of time to find the answer and outwit a thief of the worst possible kind. A woman who believes she can’t lose.
~~~~~~~~~~~~~~~~~~~~~~~~~~~~~~~~~~~~~
Love Love Love this series - and CAGED is the best so far! Be sure to check out the goods on that book as well over HERE at JTP's site.
Thanks for stopping by & best of luck!!
a Rafflecopter giveaway