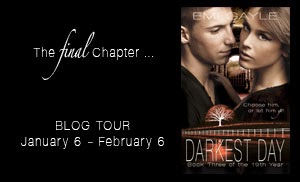 So excited to have Ms. Gayle here for part of her Darkest Day (19th Year #3) blog tour!

I asked how she researched mythology for this kick@$$ series.

It's amazing to me that people do so much research into their characters to create them. In a sci-fi world, I get it. Historicals too because for accuracy, it would be important to know exactly what did/could and could not happen in century 'x'. However, in a paranormal world, the sky's the limit when it comes to the creation of a supernatural, paranormal, mythological creature.

Yes, there are standards and beliefs that are already widely known - such as centaurs in Greek mythology or the gods in Roman and Indian mythology. There are werewolves and vampires that have been 'altered' by way of Hollywood and general creativity.

In my research, all I did was skim the surface. I looked more at the names of creatures than what they were by typical convention. I looked at the word 'changeling' for example and determined that while I know the mythology, I wanted to alter it to be what I made up vs. what everyone would expect.

Now for the other creatures in the book - vampires, fairies, demons, etc. in order to keep the world building smaller, they were mostly standard convention because I wanted readers to have some normal expectations. But not in the main character. Not in the one around whom the entire trilogy was written. There I took liberties with what she could be and what she would be.

And to do this I just opened up my mind to the possibilities. For everyone else ... that's where Wikipedia comes in.

Mac Thorne’s time as a Changeling is coming to an end. It may have taken eighteen years, but Mac did finally manage to do what the Council wanted: she chose a teacher and renounced the in-between. There’s just one last step. She must say goodbye to her human. Forever. After being challenged in every way possible, Mac leaves what she thought would be the easiest task for the last possible moment. As midnight on July fourth draws near, though, she hasn’t found a way to give up Winn Thomas. Nor does she want to. With time running out, Mac stands at a literal crossroads. Choose Winn, and she’ll be stripped of the only family she’s ever known — vampires, dragons, and her favorite demon. Even her own mother. Accept her position on the Council and rule as an equal to her twelve peers, and she’ll forget Winn ever existed. Independence and freedom have never before been so limiting. In this final chapter of the 19th Year Trilogy, it’s time for Mac to decide. Responsibility? Or Love?

What will Mac choose upon her 19th birthday?

Head over to Ms. Gayle's website HERE to vote!