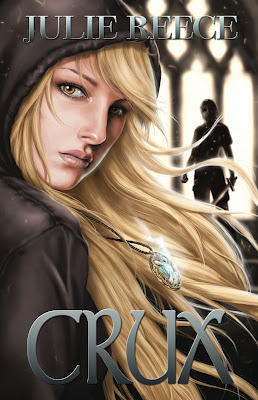 YA Paranormal Fantasy
by Julie Reece

She should have run. Now, she’ll have to fight.

Eighteen year old Birdie may be homeless, but she’s surviving, that is until a mysterious guy throws money in the air like a crazy game show host, and she grabs some with the idea she’ll be able to buy dinner that night.

In that singular moment, unassuming Birdie becomes the girl in everyone’s viewfinder. Thugs want to kill her. Money-guy wants to recruit her. The very hot, very rich, and very out of her league Grey Mathews wants to save her.

Birdie, though, wants nothing to do with any of them, until she realizes fate didn’t bring them all together.

Now, with only twenty-one days left, she’s got to decide whether to follow in the footsteps of those before her or risk her life for people she’s only just met.

Birdie lives on the streets, and a run-in with a wacko leaves her with more than she ever had - and an amulet that takes her on acid trip-like 'journies'. What she sees, however, are secret hints of what she'll need to lift an ancient viking curse. But she won't go it alone.

Let me just say if I was an 18-yr-old, I'd have a major crush. Hot, rich, and amazingly taleneted, he's all Birdie thought she'd never have.

Yummies:  Who doesn't love a snarky, strong female character? Especially one who has baggage - emotions held behind protective walls just begging to be pulled down? Enter that boy again - one who, while just seeming to have it all, has issues & pain of his own. Both are well rounded, flawed, & likeable. It was easy getting caught up in their stories.

The plot itself was totally unique for me. I LOVE finding a book unlike anything I've read before.

Yuckies:  A huge fan and writer of fantasy, I MUST call attention to the magical elements of this story. While some may argue, 'It's fantasy, anything is possible!' I disagree.

I NEED the believability factor.  I need to be convinced that what I'm reading could really happen. Logically it must make sense. Thus my 2 issues.

1 - The first time Birdie uses the amulet, it's effortless. Untried, unpracticed, having never attempted it before, the magic just happens. If it had been made clear it was the amulet itself doing everything & only using her as the conduit, fine. But that's not what happened. She controls the wind with ease and in the middle of it (in a conversational tone) asks Grey for his help. No panic. No weakness - like controlling elements is a cinch. Granted, later she struggles with the other elements, but the intial ease really bothered me. (Sorry Julie.)

2 - Lack of consequence. Normally magic draws from something, a 'taking' if you will. Here however, there is nothing. The amulet's magic is free. No consequences whatsoever. This really left a bad taste in my mouth, especially in the end when she & Grey are left with the amulet's power becoming a part of their physical beings. Two teenage supermen with no kryptonite ...??? While they're both great kids, what's to hold them in check? Balance the good & evil intent untold powers can bring?

Recommend:  Looking above it seems there more yuck than yum, but that isn't true. I just like to ramble on the fantasy aspects of fantasy.  ;)

Read this book? ABSOLUTELY! It took me 3 days (thank you daughters, traveling, cleaning - life in general) but my mind was never far from Birdie & Grey. They had my attention, my desire to see them through to the end, and for me that's what makes this a book great.

So whatcha think? Wanna read it? Gunna nab it? Check out my interview with Julie Reece HERE & enter in the drawing for a signed bookmark!

Get a copy of Crux!