Feed Your Reader #BlogHop 3 Ebooks up for grabs! 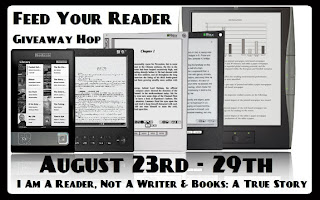 A huge thanks to I Am A Reader, Not A Writer and Books: A True Story for hosting another awesome blog hop!
This time around we're feeing our e-readers! LOVE my kindle.
Anyhoo ... I'm offering a handful of books from cyber-friends of mine for your reading pleasure. They're listed below. Click on their titles or author name to learn more.
Best of luck & be sure to check out the other participating blogs listed below. We're talkin' over 100 e-books up for grabs!

Synopsis:﻿
Sophie Galen is an advice columnist who is saving the world - one damned person at a time. Shy and sensitive Sophie has all but given up on love until she meets Marek, a mysterious stranger who seduces her with his striking good looks and his take-charge attitude. Yet the darkness she senses within him may be more than she is prepared to handle when Marek draws her into a world of vampires, werewolves, and treachery. Forced to leave behind the comfortable routines and certainties of her past, Sophie makes unbearable sacrifices and uncovers hidden truths about herself and the world around her.

Synopsis:
The Grimoire turns its own pages and can answer any question asked of it, and Kara Magari is its next target.

Kara has no idea what she's getting herself into when she stumbles across the old book while hiking a hidden trail. Once she opens it, she's thrown into Ourea: a beautiful world full of terrifying things that all want the Grimoire's secrets. Everyone in this new world is trying to find her, and most want to control her.

Braeden Drakonin grew up in Ourea, and all he’s ever known of life is lying. The Grimoire is his one chance at redemption, and it lands in his lap when Kara Magari comes into his life. He has one question to ask the book – one question that can fix everything in his broken life – and he’s not letting Kara out of his sight until he gets an answer.

There’s no escaping Ourea. There’s no going back now.
﻿

﻿Synopsis:
Sixteen year old Carly wants to write her own life and cast herself as a superhero, but the story gets out of control when she stands up to a bully and he turns on her. His increasing harassment forces her to battle flying hooks, giant thistles, doubt dragons and a suffocating closet. Dylan, a karate-trained nerd who supports her stand, turns out to be a secret admirer, and while he struggles to control his inner caveman, Carly searches for her own way to stop the bully.  An old hippie shows her an inner magic that’s supposed to make her invincible, but will Carly learn to use it before her knight in shining armour risks all in a battle with a fire-breathing dragon?
This heart-warming magical realism story will inspire and empower teens and adults alike.
a Rafflecopter giveaway
Best of luck, folks! Don't forget to click on the links below for the chance to win over 100 ebooks!
﻿