#BookReview : The Moon Dwellers (The Dwellers #1) 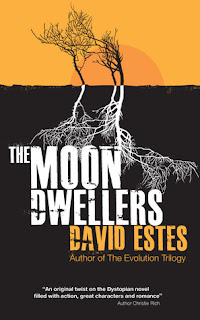 by David Estes
YA Dystopian
From Goodreads:

﻿In a desperate attempt to escape destruction decades earlier, humankind was forced underground, into the depths of the earth, creating a new society called the Tri-Realms.

After her parents and sister are abducted by the Enforcers, seventeen-year-old Adele, a member of the middle-class moon dwellers, is unjustly sentenced to life in prison for her parents' crimes of treason.

Against all odds, Adele must escape from the Pen and find her family, while being hunted by a deranged, killing machine named Rivet, who works for the President. She is helped by two other inmates, Tawni and Cole, each of whom have dark secrets that are better left undiscovered. Other than her friends, the only thing she has going for her is a wicked roundhouse kick and two fists that have been well-trained for combat by her father.

At the other end of the social spectrum is Tristan, the son of the President and a sun dweller. His mother is gone. He hates his father. Backed by only his servant and best friend, Roc, he leaves his lavish lifestyle in the Sun Realm, seeking to make something good out of his troubled life.

When a war breaks out within the Tri-Realms, Tristan is thrust into the middle of a conflict that seems to mysteriously follow Adele as she seeks to find her family and uncover her parents true past.

In their world, someone must die.

If I gave half stars, this one would definitely be a 3.5. While the story idea behind this book is good - intriguing - I had a few issues. The tension & conflict is there in abundance which kept me clicking the kindle page turner.

Yummies:  I really like the MC, Adele. She's a kick-a-bad-guy's-butt teenager who was taught to fight by her father. I had no problems visualizing the fight scenes where she easily brought down men twice her size. It was done in a totally believable way.

I appreciate an author who isn't afraid to kill off their darlings. While the whole book seems to be too coincidental, there are hints as to something or someone pulling strings. It's as though a higher power is at work, orchestrating events so as not to seem, 'Oh please!' to us readers. The death of one character in this case showed Mr. Estes has a master plan. (At least I hope.)

World building was decent. No info dumps or long history lessons THANK GOD. I skip those suckers every time.

Yuckies:  I had a major issue with the first line. It's that writer's inner editor in me, but when the prologue is dated 6 months ago and is written in the present tense ... well, bothersome to say the least. I was really nervous it was a forshadowing of things to come. Thankfully it wasn't. Not sure why it was written that way, but oh well.

The 2nd issue is the whole romance element. Love at first sight? Feeling as though they've always known eachother - that they're connected with never having spoken? Bothered me. Granted, this is stuff in fairy tales, but in today's book market it feels forced IMO. Every. Time. I do wonder, though, if all the tingling skin / energy of his touch is supposed to be telling us something about that possible coincidental / higher power thing I mentioned above. If so, I really feel it should have been made clearer - more hints so we're not left with a believability issue I'll have until I read the next installment.

The 3rd issue - a grown man writing in 1st person with the voice of a 17 year old girl. Tough to do. Tough to conquer. Emotions and thoughts were definitely a bit off in places for me.

Recommend:  Yes. While I'm not jumping up & down, this book reallywas decent & worth the read.