I’m thrilled to have S.M. Boyce visiting with me today for her Treason Blog Tour. Be sure to click on the image above for a listing of other stops. Also, check out the banner at the end of the post for a chance to win some goodies! I know we all love goodies.  *wink*

Anyhoo. Without further ado, here she is.

Why Book Covers are So Important

First off, thanks for having me! I’m here on my Treasonous Blog Tour to share a dreadful mistake I made early in my writing career. Learn from me. Please.

Here’s the lesson: People judge books by their covers.

Yeah, that’s probably not really a surprise to you. But here’s something I didn’t know until a bit late in the game: the covers themselves sell books.

Sometimes, people will buy a book specifically because of the cover. There are entire Goodreads shelves and Listopia lists dedicated to beautiful covers. While I haven’t bought a book just for the cover, I will admit that it’s pretty tempting when eBooks are only a few dollars.

But even if someone doesn’t buy a book for only the cover, the cover image is the first line of defense when it comes to sales. When a reader skims through dozens or even hundreds of books, only the most attractive will catch their eye. You don’t need science for that one. Eye-grabbing covers can trump even the most well-written back cover copy.

The bottom line is: authors must have great covers that both represent the book’s genre and catch potential readers’ eyes. It’s a hard mix.

When I first released my debut, Lichgates, I modeled the cover after a book of magic featured in the book called the Grimoire. The idea was people would finish the novel and then realize they were holding the Grimoire the whole time. Nifty, right? I thought so.

Problem is, the Grimoire itself wasn’t all that pretty. It’s a brown leather book with a four-leaf clover symbol engraved on the front. So while the idea was a neat one, I wasn’t thinking in terms of marketing or sales. A cover is meant to draw readers in, not spark a neat thought after they finish the book.

So I sat down with my husband and reworked the covers for the entire series. After some intense discussions, we’d redesigned them such that they were visually appealing and sparked a certain level of curiosity in those to whom we showed the designs. Check out the before and after below. 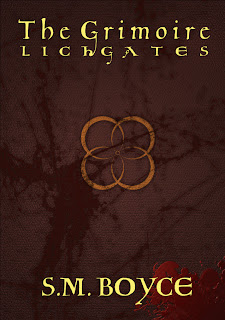 So what do you think? Do you like the old one better, or the new? Neither? It’s okay. I can take it.

While we’re at it, what are some of the most beautiful covers you’ve ever seen? Have you ever bought a book just for the cover? 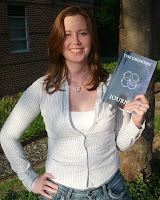 S.M. Boyce is a fantasy and paranormal fiction novelist who also dabbles in contemporary fiction and comedy. Her B.A. in Creative Writing qualifies her to serve you french fries, and she updates her blog a few times each week to keep you entertained.