Welcome to the final interview of my week-long Meet The Author fest! We're focusing on the six lovely ladies of the Make Believe Anthology from J. Taylor Publishing that released December 3rd!

Today we're meeting with the headliner. 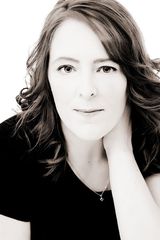 Author of the Holloway Pack Series.

Thanks for joining me here at SS. First off, tell us why we should read your story.

What is the first thing you thought of upon seeing the picture prompt for the Make Believe Anthology?

That I needed to alter my story a little? Ha!
Okay, fess up time: I actually already had the inkling of a storyline in my head from the moment I was asked to front the anthology—at which point I hadn’t seen the picture prompt. So then, when the picture prompt came through, I realized I had some tweaking to do to try and incorporate the image into the story in my head.

Which came first: The story or the character?

Definitely the character. I had Cole, my MC in my head, and I knew she’d be booking an escort for the night—enter Benjamin Gold—but I had no idea at this point what her reasons for booking one would be, just that some crazy stuff would end up happening and the evening wouldn’t go exactly as planned/expected. So I opened up a Doc, started typing, ended up with an opening scene that I could work with and that gave me a decent feel for the MC, then wandered off and left it to stew. By the time I returned to it, I had a clearer feel for where it was headed—though I did get so far through, decide I didn’t like where I’d taken the characters, and so deleted around 2000 words and altered their course. I got it how I wanted in the end, though. J

How did you choose your setting?

My settings are usually chosen by picking whichever English county takes my fancy, and then creating a fictional town/village and venues and planting them down in there—that way, I can write the scenes however I need them to be without totally angering the locals with my lack of accuracy.

Is there a moral behind your story?

Yes! Booking an escort is a baaaaaad idea! Ha!
Nah, I’m just kidding. It’s more like: everyone has an inner strength; sometimes a person has to be put to the test before they look deep enough within to find their own.

What was your favorite food when you were a child?

When I was allowed to make my own sandwiches for school (usually when my parents were still in bed and couldn’t see what I was getting up to), I’d first smother my bread in ketchup instead of margarine, then place millimeter-thick slices of cheese on there, and then meticulously slice pickled onions to layer over the cheese. Looking back, I can’t believe nobody ever complained about my breath, lol.

What is your favorite body part?

O_O
You mean my own? Or in general? I think pretty much the entire rear end of a bloke is the ultimate eye candy (if they’re fairly toned)—from his shoulders, down over his blades, to the small in his back just above where they nearly always have twin dimples to lead the way to their arse … Nom. ;)
As for my own? Dude! I dunno. I have nice clavicles?

If you could choose to stay a certain age forever, what age would it be?

If you won the lottery, what is the first thing you would do?

Probably cry. Then scream. Then have a heart attack. *snort*

If you could be any fictional character, who would you choose?

Merit from the Chicagoland Vampires series. But not forever. Just for the good bits. Ha!

What would you name the autobiography of your life?

Do You Have Any Syrup To Go With That Waffle? (<<all thanks to Aimee Laine
Look out for it, guys! Coming to a store near you soon! *snicker*

What did you do growing up that got you into trouble?

Where I grew up was not only on the edge of the town where I lived, but also on the edge of our village within that town. And walking around 80 yards to around the corner would take me to a view of nothing but farmers’ fields. From there, walking a little ways right would take me to the road to the countryside, as well as to the entrance to Langley Mill.
Langley Mill wasn’t the kind of place parents wanted their kids hanging around. Naturally, I tended to go there quite a bit. I was never very good at concealing it, though—especially when I’d turn up with a bucket of frogspawn I’d caught. ;)

What is something you learned in school that you think is useless to you today?

Algebra.
I mean, dude, come on … what was the point?

If you could move anywhere, where would you go and why?

I’d move into The Rectory—a house I’ve seen for sale in Pembrokeshire (but way out of my price range, lol).
Why? Well, it’s just so serene and peaceful. Whilst there are only a handful of other properties on the lane, the Rectory has a high stone wall surrounding it, with a circling brook that you need to drive through to hit the driveway, and the neighbor opposite is a traditional church. To the rear of the property is a matted woodland and a couple of fields … Do I need to say more?

Can you keep secrets? Describe a time you didn't.

Yes! *Nods head*
What do you mean, describe a time I didn’t? (Psst, I can’t fess up to those. My friends might read this. Ha!)

There's still over 24 hours left for a chance to nab a freebie copy of Make Believe HERE.