Today I'm thrilled to have Nya Rayne, romance writer extraordinaire, stopping by to share a little about herself & her newest release! So let's dive right in.

Are you a planner or pantser?
I am definitely a pantser.  I usually try to start out planning the first few chapters, but it never goes much further than chapter 3.  By then, the book takes on a life of its own.

Favorite author of all time?
My favorite author of all time who I would drop everything for has to be John Sanford.  Odd right? Him being a crime writer and all…lol.  But I love the man and I absolutely love his Prey Series, though I will say that his last book did let me down.  On the romance side, it would have to be Lora Leigh with Christine Feehan as a close runner up.

What’s been your greatest high as an author thus far?
Wow, so many fantastic questions!!  My greatest high thus far has to be my first review for “For His Love”.  It was written by a self-proclaimed cynic of romance, who said my novel converted him.  Now, he could’ve just been being nice, but I choose to think he was being genuine!!  So that and being picked up by my first publisher, who shall remain nameless.  It didn’t end well, but it was still a high for me.

Greatest low?
My greatest low is actually connected to the last question.  It was when my first publisher went belly up and made me and a bunch of other good reputable authors chase her for our money, which we still haven’t gotten. If that wasn’t bad enough, we also ended up chasing her for our rights back to our books.  It’s a lesson I’m glad I learned early rather than later.  To all you aspiring writers out there, all that glitters definitely isn’t gold.

Are you an optimist or pessimist?
Pessimist before 10 am, Optimist the rest of the day and especially after a few glasses of white wine.

Rule follower or free spirit?
I, my friend, walk the line.  Depending on the reason, I’ll free spirit it all the way.

Coffee or tea?
Tea, because I can’t handle the caffeine.

Cake or pie?
A little bit of both…lol 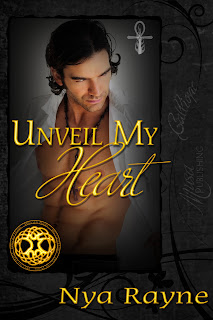 Blurb for Unveil My Heart:

I have roamed the earth for over three millennia alone, praying to one day find the other half of my soul. The one woman who would make my deadened heart beat once more. I never imagined I’d find her in a bloodied heap beneath the claws of a despicable Yazaron, the very bane of my existence. I saved her and as a reward was given three days to make her love me or I would cease to exist. Literally.

She spent those three days in ICU fighting for her life. And now when my time left on this earth is borrowed at best, the woman who I would gladly die a hundred times over for, would rather spit on me than look at me.
Fate, what a cruel bitch.

“Blaine, I said don’t worry about it. I have more money than Switzerland and, until you, I hadn’t a clue as to what to do with it. I was happy to finally spend some on a person who deserved it.”
Hayze’s voice rolled through her like a flame. His breath smelled of cinnamon and his lips looked so rose petal-soft she wanted to lean in that extra inch and kiss him, but she couldn’t. If she allowed herself to feel anything more for him, it would destroy her when he left her. And he would leave because he was too perfect, too rich, and she was too unlucky to have someone like him to call her own. Still, she couldn’t deny that while she pushed him away with her right hand, the left one kept reaching for him.
He smoothed the back of his hand down her cheek as he slowly licked his lips, his eyes begging her to stay a moment longer, to hold on to this stolen moment between them.
“I-I-have to pay you back somehow,” she whispered, not breaking the contact.
Hayze tucked a few strands of hair behind her ear. “I assure you it’s not necessary.” His eyes searched her face from brow to chin and cheek to cheek, in a whisper of promises and apologies she wasn’t quite ready to hear.
“I don’t like being indebted to anyone.” She swallowed. “If I am, I feel like I’m that person’s property.”
He traced her lower lip with the tip of his thumb as he leaned in closer. “Would it be that bad, Blaine, to belong to me?” A rueful smile crossed his face before he hid it.
“I—You don’t know me. I don’t know you.” Blaine closed her eyes and tried to ignore the way her heart reached for his and her soul reveled in his touch. Something soft brushed her lips, but she couldn’t say it was his lips because lips weren’t supposed to be that soft. She opened her eyes and watched in fascination as the tip of his tongue flitted over his lower lip. “I have to pay you back,” she blurted, jerking her head out of his hold.
“If you must, I’ll make a deal with you.”
“A deal?”

Paranormal Romance author Nya Rayne resides in South Carolina with her two rambunctious German shepherds. She has been in love with fiction since she picked up her first copy of V.C. Andrews at the age of 11.  She wrote her first story at the age of 15, which never saw the light of day in the publishing world, but was so much fun to write that she kept on writing. She is also a powerful advocate for reading and writing. When she’s not brain storming on a new novel, she can be found devouring a story by one of her favorite novelists, rescuing dogs, or volunteering at her local SPCA.
Stalking Links: