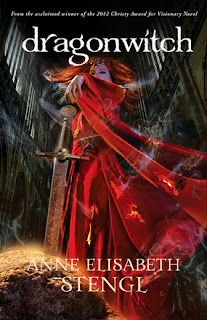 
A New Tale Is Added to this Christy Award-Winning Fantasy Saga!

Submissive to her father's will, Lady Leta of Aiven travels far to meet a prospective husband she neither knows nor loves--Lord Alistair, future king of the North Country.

But within the walls of Gaheris Castle, all is not right. Vicious night terrors plague Lord Alistair to the brink of insanity. Whispers rise from the family crypt. The reclusive castle Chronicler, Leta's tutor and friend, possesses a secret so dangerous it could cost his life and topple the North Country into civil war.

And far away in a hidden kingdom, a fire burns atop the Temple of the Sacred Flame. Acolytes and priestesses serve their goddess to the limits of their lives and deaths. No one is safe while the Dragonwitch searches for the sword that slew her twice...and for the one person who can wield it.

"You are early, my lord."
Alistair shrugged. The library boasted only three windows, mere slits in the stone, all west- and southward-facing, admitting none of the morning light. Thus the room was full of candles sitting in wooden, wax-filled bowls. Their glow cast Alistair's face into ghoulish shadows, emphasizing the dark circles beneath his eyes.
The Chronicler frowned, not unkindly but with measured concern as Alistair took a seat at the long table in the center of the room. "Another restless night?"
Alistair buried his face in his hands. Then he rubbed at the skin under his eyes, stretching his face into unnatural shapes, and ended by pulling at the roots of his hair. "You're an intelligent, learned man, are you not, Chronicler?"
"So some would say," the Chronicler acceded.
"Have you," Alistair continued, still pulling at his hair and studying the grain of the wooden table before him with unprecedented concentration, "in all your readings, picked up a word or two concerning dreams?"
The Chronicler set aside his quill and pumice stone, folding his arms as he turned on his stool to more fully look upon the young lord. "What manner of dreams?"
"Recurring," said Alistair, darkly. He stared at the table as though he should like to burn it with his gaze. The candlelight shone into the depths of his eyes, turning the pale blue irises to orange.
The Chronicler tipped his head to one side. "Are we speaking of a dream you have experienced, Lord Alistair?"
Alistair nodded.
"In this dream, did you see an ax, a sword, or any form of iron weaponry suspended above your head?"
"No."
"Did you see the face of one long dead calling out to you from behind a shadowy veil?"
"No."
"Did your last-night's supper confront you in an antagonistic manner?"
"What?" Alistair looked up.
"Did it?"
"Why would I dream something like that?"
The Chronicler leaned back on his stool, reaching to a near bookshelf from which he selected a volume. The vellum pages were neatly copied in a flowing, if shaky, script, and all was bound up beautifully in red-stained leather. The Chronicler flipped to a certain page illuminated with images more fantastic than accurate. He read:

"Ande it dide com aboot that Sir Balsius, moste Noble Earle of Gaheris, saw withyn the Eiye of hyse Mynde a sertayn Mutton upon which he hade Et the night prevyus. And thyse Mutton did taxe Hym moste cruelly for having Gnawed upone its Joints. And it spake unto Hym, thusly, sayinge: 'And surely Thou, most jowl-som Lorde, will die upon the Morrow, and the Wolfs will Gnaw upon Thyy Joints.' So it dide Transpyre that Sir Balsius betook Hymselfe to the Hunt, and--"

"Wait, wait!" said young Alistair, his brow puckering. "You're telling me that this Earl Balsius--"
"Your great-great-grandfather, if I recall the chronology correctly," said the Chronicler.
"--dreamt about an antagonistic mutton and died the next day?"
"According to my predecessor, Raguel, yes." The Chronicler shut the book and smiled at the young lord, a grim, mirthless sort of smile. "But I give little credence to these so-called histories. Neither should you. Dreams are merely dreams, and stories are merely stories. They are subjects of curious interest but nothing upon which to base your life or your future."
He shoved the volume back into its place with perhaps a little more vehemence than was called for. Alistair, however, did not notice. He was trying to recall what he'd eaten the night before.
"What about," he said, a little embarrassed but eager to know, "what about a pale-faced child?"
"Come again?" said the Chronicler.
"A pale-faced child. Paler than any child I ever saw. Like a ghost or a phantom. Running along the edge of a bottomless chasm, and . . . " Alistair stopped, his mouth suddenly dry, and stared into the flickering candle flame, unable to continue.
"Is this your recurring dream, my lord?"
"Perhaps. Some of it."
"Well, no doubt about it then," said the Chronicler. "You're going to die."
"What?" Alistair nearly knocked the candle over as he spun to face the Chronicler. "Do you mean it?"
"You saw the pale-faced child beside the bottomless chasm?" The Chronicler selected another volume, slid down from his stool, and approached Alistair at the table. "Then there can be no doubt about it. You're going to die. A slow, lingering death brought on by study and academic application." He plunked the book down in front of Alistair. "As long as you're here, you might as well start reading. Open to the tenth page, please."


Anne Elisabeth Stengl makes her home in Raleigh, North Carolina, where she lives with her husband, Rohan, a passel of cats, and one long-suffering dog. When she's not writing, she enjoys Shakespeare, opera, and tea, and studies piano, painting, and pastry baking. She studied illustration at Grace College and English literature at Campbell University. She is the author of HEARTLESS, VEILED ROSE, MOONBLOOD, STARFLOWER and DRAGONWITCH. HEARTLESS and VEILED ROSE have each been honored with a Christy Award.