LOVE the title of this book!

There’s only one thing on Becca Sinclair’s Christmas list this holiday season – her very own column in the local paper. And if she can build a huge blog following, her wish just might come true.

Enter Dan “Wolf” Wolford aka the man-whore next door and the new star of Becca’s popular, post-divorce blog about men. A Navy SEAL turned commander of the Florida Marine Rescue Unit, Wolf’s the very definition of the word alpha – and with an endless rotation of women on his doorstep, this hunk on a Harley has Becca and her female followers all hot and bothered!

All Becca wants for Christmas is her newspaper column, right? But when she finds herself the target of Wolf’s irresistible attentions, her snarky comebacks become less and less convincing and, suddenly, she’s not so sure anymore… 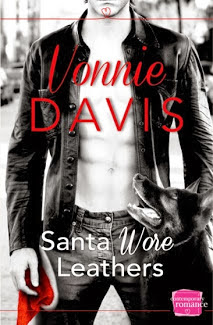 Wolf strode to her townhouse, rang the doorbell and waited.

Finally, her door opened, and he was greeted with a scowl.

“What?” She tugged the lapels of her short white silky robe together.

“I…ah…” His gaze snagged on all those ample curves showcased by the slinky material. I…ah…”

“You said that already.” She fisted a hand on her hip.

Einstein cannonballed around Becca with something red clamped in his jaws. He streaked across the grass, his strong muscles propelling him as he circled both of their yards.

“Get back in here!” Becca pointed into her house.

Einstein loped across the grass and shrubbery, ignoring his owner’s command.

Maybe if he acted the hero and returned the pet to its owner, he’d gain a few brownie points. “Stay here. I’ll get him.” Wolf took off after the dog. Seeing he was being chased only made Einstein run faster. Wolf followed him twice around the yard in front of Becca’s house. The dog leapt over a flowerbed and stopped, his head lowered, shaking his prize, his hind end elevated, wiggling in excitement.

“Give me that.” Wolf stepped to the right around the flowerbed. The dog trotted to the left. In a quick move, he sprinted to the left and the dog dashed to the right. “Think you’re smart, don’t you?” He could have sworn the dog smiled. Wolf leapt across the blooms, hoping to grab the smartass canine. Once he’d grabbed the collar, they rolled, and Einstein yelped. Wolf grimaced as he, too, rolled across a low-growing cactus and into the trunk of a palm tree. “Dammit.”

The dog whined and dropped the fabric to lick and bite at the prickly thorns in his groin.

“Easy now, Einstein.” Wolf cooed as he slipped his Swiss army knife from the front pocket of his jeans.

“What’s wrong? What’s going on? What are you doing with that knife?” Becca tugged on the hem of her short robe and glanced up and down the street as if she thought to run out into the yard.

“Stay where you are. He’ll be fine. He’s got some thorns in his hide.” Wolf removed the tweezers stored in a slot of the knife and began extracting the offending needles. “We can’t have an awesome fella like you in pain now, can we?” He worked as quickly as he could. “One more, big guy, and then you’ll be fine.” The dog licked him several times. “Yeah, I like you too. Let’s keep what I’m about to do just between us, shall we?” He ran his fingers over the affected groin area, keeping his attentions on the dog’s reactions. “Looks like we got them all.”

“What in blue blazes are you doing to that dog? Are you performing some kind of ‘beasty-wildy’ on him?” Mrs. Minelli, his neighbor, punctured the air with her cane, her white eyebrows arched in question.

He fought the urge to laugh. “No, Mrs. Minelli. I was taking out thorns.”

She cocked her head to the side, her cataract-clouded eyes widened. “In his penis?”

Vonnie Davis likens herself to a warm, freshly baked croissant: crusty, wrinkled and flaky—and best served with strong coffee. Since she adores humor, her writing is often a tad flaky, too. Retired, she spends her days playing Fairy God-Mother to her characters, giving them the happily-ever-after they so deserve. She lives in southern Virginia with her author husband, a man she met online. Now there’s a romantic story.