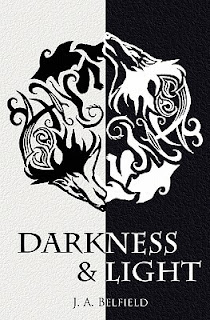 Jem Stonehouse, a housewife with a neurotic husband bent on keeping her in line, dreams about werewolves in, what she believes, is a bid to escape boredom.

Sean Holloway is a werewolf, living a charade within the human race, whose mind drifts to a bond he shares with a woman he hasn't met--at least, not in this lifetime.

Apart, the two are safe but live unfulfilled lives.

Together, they'll become prey to rival packs just as they have been for hundreds of years.

When their worlds collide, and not for the first time, instinct takes over. Dreams become reality. Futures are uncertain. To keep history from repeating itself, Sean must teach Jem about his heritage, convince her of her role, and win her love.

Can Jem accept her destiny before it's too late, or is her inner wolf buried too deep to save her future with Sean?

This was my second time reading D&L and let me tell you - I thought the first time through deserved 5 stars. Much better this time. I knew to expect (which bothered me last time) the British English, so it flowed with a nice, fresh flavor in wording. The language is distinctive & different since most authors I’ve found anyway, tend toward American English regardless of where they live.
But I digress. Onto the goodies.
Yummies: Everything. Seriously. Characters, plot, tension, climactic ending - love, hot men, the steamy … oh yeah. Ms. Belfield knows how to put a story together. There was nothing for me to nitpick.
Believability? No issues. Imagine that! ON the believability factor though - the character of Jem’s husband, Peter, hit a little close to home for me. Won’t say much more than that, but from someone who knows, Jem’s responses, thoughts, & emotions toward that arsehole are spot on. Completely believable.
To see Jem’s transformation, to see her come to life is very refreshing. I could have been reading about myself. Without the werewolf part, of course.  ;)
Yuckies: Um … none? Some might find scenes a little violent, but let’s face it folks - animals are animals. They protect their own. Other’s might cringe, but I have to admit I was like ‘Hell yeah!’ as blood splattered. Yup. I’m a farm girl who grew up with three brothers & guns. Bring it on.
Recommend: Absolutely. Even if you’re not a PNR fan the beautiful transformation of a wounded, hindered life is perfectly portrayed. Perfectly. Trust me - I would know.

Other Stories in this series: