Thanks this time around to I Am A Reader, Not A Writer and The Write Path for another chance to give away some goodies. And what a goodie I'm offering - a signed copy of Call of the Sea by my beta bud, Rebecca Hart. You can find my review HERE along with a character interview with the smokin' Daniel O'Rourke. 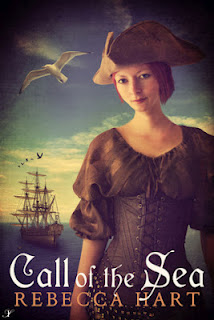 Call of the Sea
by Rebecca Hart
From Goodreads:

Years later, when the leader of a band of bloodthirsty pirates murders Captain Winters, Daniel and Elysandra’s lives come crashing back together with the force of a hurricane. Both experts in deception, they must find a way to trust each other if they are to have any hope of hunting down the captain’s killer.