#Review : For His Love by Nya Rayne 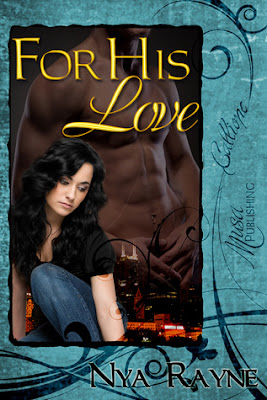 For His Love
By Nya Rayne
Futuristic Romance


She loved him from the moment she saw him, but he was never hers to love.

In a world where men are an endangered species, available only to the ruling class, and the majority of women date androids, the last thing Phia Zen wants is to buy her lover from a catalogue. Imagine her surprise when she receives her purchase, Donté, and discovers he’s a living, breathing man. Problem is he truly belongs to the most powerful woman in the world, and she’ll stop at nothing to get him back.

For the love of a real man, how much will Phia sacrifice? Her family? Her freedom? Her very life and the life of the only man she’s ever loved?

*I’m being cryptic on purpose !*

I read the last line and clicked on my kindle for the next page. Seriously? I mean I knew it was coming, but ending it that way?? I wanted more dang it!

Never read anything like this, but it reminded me SO much of the movie, The Island, which I’ve seen countless times. LOVED IT. That being said, it took me awhile to totally get Phia, the MC. I didn’t empathize with her at all. It took a nice little twist a few chapters in to completely capture my attention - which leads me to the first yummy.

Yummies:  I thought this was going to be another hot romance with the typical tension & conflict. All gets resolved, one last sex scene, the end.

In chapter 9 this insane bitch makes a grand entrance. Violence. Horror. My initial thought was WTF? For half a minute I thought a chapter from a different book somehow snuck into this one.

Oh, but the scene started the plot thickener that had me clicking away, faster & faster. It took my thoughts on 3 stars up by a half. Then other characters got more involved and voila! 4 stars.

Yuckies:  No real connection with the MC for me. But as I always say, could just be me. I’ve got 3 brothers, so I couldn’t wrap my head around her ‘never seen a real man before’ fainting spells. I know, I know. It's a futuristic all-female society - I tried to tell my brain that, but the lump refused to accept it. I remained a mere reader on the outside rather than a fellow emotional rider of Phia's journey.

Recommend:  Yes. I would have said ‘Eh’ ‘til that evil whore appeared, but once she did … yup. Made an alright story pretty durn good.